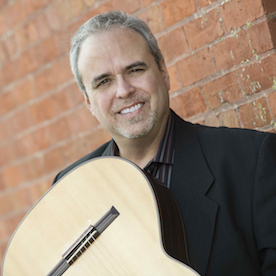 Jeffrey McFadden has been acknowledged as one of the finest guitarists of his generation. Over the past years, concert engagements have taken him throughout Canada and the United States and into Europe.He has given World Premieres of works by numerous composers and has been a featured performer at several international music festivals, including Guitar '87 and GuitarFest '91 in Toronto , Gitarren-Symposium Iserlohn, Lachine International Guitar Festival, the Columbus State Guitar Symposium, The Niagara International Chambre Music Festival, the National Flute Association (USA) Convention and many others. Read more 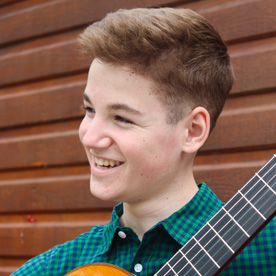 David is passionate about plucked instruments since a very young age. He began studying the guitar at just 11 years old as part of a workshop at school. For the past two years, he has been training more seriously with the guitarist Steven Cowan, in private lessons. He has been studying with the same professor at the Conservatoire de Musique de Montréal since September 2019. David has also worked with the renowned Jérôme Ducharme at the Père- Lindsay Musical Camp for the past three summers.In addition to classical guitar, David has been working on the renaissance lute for a year with Anthony Harvey. Read more 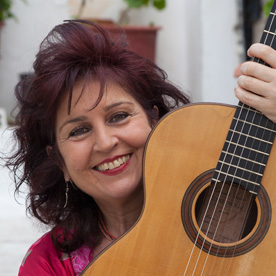 Described by USA Review as doing for the Greek soul what flamenco does for the Spanish, Eleftheria Kotzia has toured regularly in Europe, Canada, the United States, South America, North Africa, Australia, New Zealand and the Far East. She has performed both as a soloist and with orchestras at many of the great International Guitar and Music Festivals, including the 10th Anniversary Series of the D' Addario Foundation in the USA, the Festival Estival in Paris, the Tavener Festival in Athens, the Segovia Celebrations in Spain, the Guitar Foundation of America in the USA (three times), the 10th Anniversary Series of the Festival ‘Guitarras Del Mundo’ in Argentina, the City of London Festival and various other festivals around the world. Born in northern Greece, in Alexandroupolis , Eleftheria Kotzia studied guitar at the National Conservatory in Athens, the Conservatoire National Supérieure in Paris, and finally at the Guildhall School of Music in London. Among her teachers have been Julian Bream, Alexandre Lagoya, Dimitri Fampas, David Russell and Timothy Walker. She was the winner of the first prize in the 6th International Guitar Competition in Milan. When Eleftheria made her London debut the Times admired her skill, unfailing beguiling tone and her ability to vary her touch with fluency. Since then Eleftheria Kotzia has performed for various radio and TV stations, including the BBC and WNYC and has given recitals at some of the most famous concert halls in the world, including the Merkin Concert Hall and the Carnegie Recital Hall in New York, the Herbst Theatre in San Francisco, The Wigmore Hall , the South Bank Centre and St John’s Smith Square in London, the Megaron Concert Hall in Athens, Les Halles and the Ampitheatre Richelieu - Sorbonne in Paris, the Jubilee Hall - Raffles Hotel in Singapore, The Rudolfinum in Prague. Eleftheria Kotzia has an impressive list of recordings to her credit. Among them the first recording of Michael Tippett's The Blue Guitar, which was described as life enhancing , enjoyed unanimous critical acclaim and was selected by Gramophone magazine as a Critic's Choice Recording of the Year. The American Record Guide hailed her as a wizard-a strong sensuous player with bite and sass. John Tavener's only solo guitar work, Chant, was also recorded for the first time by Eleftheria Kotzia, (‘Mediterraneo’) in a special adaptation made for her by the composer. Her CDs ‘Fuoco’ on Harmonia Mundi - Mandala and ‘La Guitarra Latina’ on Chandos, ‘Gypsy Ballad’ (Somm) and ’Respectus’ have all received rave reviews Kotzia was selected to represent Greece in London's Millennium Celebrations: Strings of Pearls . She played the guitar part in the first performance of John Tavener's Fall and Resurrection in St Paul's Cathedral, London, which was televised live and subsequently issued on CD/DVD. An inspirational creative force Eleftheria Kotzia set out in 1992 on an important initiative: the encouragement of non-Greek composers to write Greek -influenced music for her. Her uniquely pioneering work has resulted in compositions by such composers as Dusan Bogdanovic (his popular ‘Levantine Suite’), Stephen Dodgson, Carlo Domeniconi, John Duarte and Edward McGuire, who were all influenced in different ways by the richness of the Greek musical heritage. Eleftheria has also presented numerous works by Greek composers in her recitals around the world such as Theodorakis, Hadjidakis, Haliasas, Giorginakis, Pittas, Tatsis, Boudounis. Estonian René Eespere and Chilean composer Edmundo Vasquez have also dedicated works to Eleftheria. René Eespere wrote and dedicated his guitar concerto to her. It was premiered in Tallin , Estonia and subsequently Eleftheria recorded it. Passionate in collaborating with other artists she has worked with acclaimed violinist Leonidas Kavakos, Clio Gould, Luigi de Philipi , with mezzo- soprano Patricia Rosario, Flutist Judith Hall, cellist Robert Max etc. Eleftheria Kotzia has been on the cover of the major guitar magazines ‘Classical Guitar’, ‘Guitar International’ and on the cover of the music journal of the Incorporated Society of Musicians (I.S.M) and the Panhellenes. She has given interviews for the US magazine ‘Soundboard’, French ‘Guitare Classique’, the Dutch ‘Guitarren’and the Greek ‘Tar’. Eleftheria Kotzia was a lecturer at the Royal Welsh College of Music and Drama (2000-2016). She gives masterclasses and training courses around the world. She is a frequent judge in International Guitar Competitions (GFA, Benicasim , Alessandria). Within the Catalogue of Lathkill Music Publishers she directs the Eleftheria Kotzia Series which features new, contemporary music for guitar. She is the writer of the guitar method ‘Le Cahier de ma Guitare/Guitarobics’, in two volumes. Since 2007 Kotzia directs the International Guitar Course and Festival in the Chateau de Ligoure, France. "Eleftheria Kotzia holds the stage with the sort of presence I have not seen for a while. She has a robust character mixed with a quiet sensitivity .You could say it is something like the voraciousness of Julian Bream combined with a feminine delicacy of control, an alluring combination - all infused with the pizzazz of Greek spirit". Classical Guitar (Purcell Room - London). "Kotzia reminds you of the magic of the guitar. A superb disc neatly tying together the lyrical and the fiery ". W. Yeoman. Gramophone.

The ‘Gramophone’ wrote: “a perfect way to spend a magical hour bathed in Mediterranean warmth”Born in northern Greece, in Alexandroupolis , Eleftheria Kotzia studied guitar at the National Conservatory in Athens, the Conservatoire National Supérieure in Paris, and finally at the Guildhall School of Music in London. Among her teachers have been Julian Bream, Alexandre Lagoya, Dimitri Fampas, David Russell and Timothy Walker. She was the winner of the first prize in the 6th International Guitar Competition in Milan. Read more 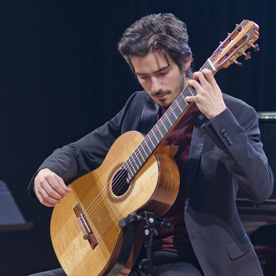 Félix Dallaire dedicates himself to the classical guitar at the age of 14. He recently graduated from Music Conservatory of Gatineau with distinction, after studying with Patrick Roux for 8 years. At a young age, he shows a remarkable ease on stage and pushes himself to develop all the aspects of a performing artist. Félix already proved himself many times in competitions, counting first place at the 2016 Domaine Forget Guitar Competition, first place at Boston Guitarfest 2018, performance in semi-finals of the Prix d’Europe 2019 and recently 2nd place in Hamilton and the Grand Prix Savarez of the Guitare Montréal International Competition 2019. Aspiring to a performance career, his dream is coming true with his performances of the 1st guitar concerto by Castelnuovo-Tedesco with the Gatineau Symphonic Orchestra in 2017 and his many concerts in Quebec, in Ontario and soon in the USA. Although he loves the solo repertoire, he is also interested in chamber music and his guitar duo with Christ Habib is certainly going to be an important part of his career. They have already won the Chamber music contest of Sorel-Tracy in 2017 and are currently working on arranging their own repertoire. Read more 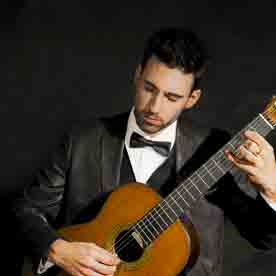 Thierry Bégin-L, a classical guitarist from Quebec, has won several prestigious competitions including nine international prizes from Spain, France, Belgium, Vietnam and Canada. He also obtained several distinctions in South Korea, Thailand, the United States, Mexico, and Austria. As a result, he was invited to perform on numerous world tours, namely in Spain, Argentina, Brazil, Mexico, Portugal, Italy, Finland, the US, and Canada.With disarming ease, Thierry Bégin-L enchants his audiences through the sincerity of his play. The audacity, virtuosity and passion of his performances deliver a rare and memorable musical experience filled with color and humor. Read more 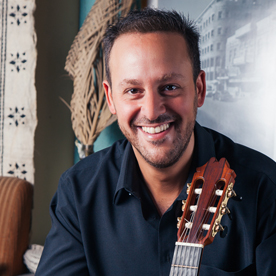 "Jordanian-Canadian guitarist Tariq Harb has appeared at music festivals and in concert halls around the world as a solo musician, chamber musician, and soloist with orchestra. He is a first-prize winner in the Barrios WWW Competition in Paraguay and in the Montreal International Classical Guitar Competition, among other competition awards. His playing demonstrates "not just his flawless technique but also his refined taste and a great, innate sense for truly beautiful interpretation." (The Jordan Times) Chosen as the CBC Radio NEXT! guitarist in 2013, Harb was celebrated as "Canada's next classical guitar superstar" and was showcased performing on radio and live at the Glenn Gould studios in Toronto. Future engagements include a full-time residency at the Notre Dame University in Lebanon and his Carnegie Hall solo concert debut in New York. Harb holds a Doctorate of Musical Arts from the University of Toronto and is currently on faculty as Professor of Guitar at Concordia University in Montreal. Tariq Harb is sponsored by Hill Guitar Company, Savarez, and LaBella Strings." Read more